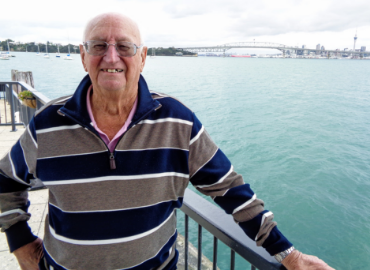 “ Dave, would you like a coffee?” asked Keith as we settled round a table at the Birkenhead Wharf Cafe for our chat about Dave’s sailing life.

“ Never had a coffee in my life!” grinned Dave. “  But beer! Now that’s another story!”

Dave,  a lifelong resident of Birkenhead,  bought his first boat in 1952, an Idle-along (IA117) ‘ Topic ‘ from Bill Williamson, and sailed from the Northcote & Birkenhead Yacht Club out of the Gold Hole on the city side of Northcote Point and at this time, years before the construction of the Harbour Bridge.

“As far as I can remember, the Northcote and Birkenhead Yacht Club had existed for  many years when I began my sailing career.”

Dave had begun sailing about 1950 with Alan (Rumpy) Riley in IA9 ‘Shannon’ and in IA17, ‘Maxina’ with Mark Windram.

“I sold ‘Topic’ to Fred Pulham who later died in a plane crash in the Kaimais in 1963. Then I built ‘Zigzag’ a Q class designed by Bill Herald.”

“ I’d gone to Northcote Intermediate but not Northcote College which didn’t have the engineering courses I wanted so instead went to Seddon Tech from 1951 – 1954, crossing daily to the city on the old ferries.”

“I don’t remember the Northcote and Birkenhead Club having a club-house at the Gold-Hole on the city side of Northcote Point. Kevin Michael and his wife were the race committee during my time there. Boats were hauled out on the flat by Bill Cauldrey’s boat yard. I left around the time  the club began to focus on keelboat racing and cruising and that’s when the Birkenhead Boating Club was formed in 1954.”

Racing off Needles Eye and  without a clubhouse, BBC was set up by a group of friends – Harry Lamb who was the secretary, Ron Jull, Bill Herald, Teddy Fitzgerald and a few others.  Racing marks and anchors, owned by Harry Lamb, were kept in Neville Paterson’s garden at the bottom of Awanui St.

“The club was very strong for the first few years, sailing mainly IAs, and then 12 footers (Q class), racing sometimes at Birkenhead but often at the Tamaki Yacht Club. Spot Riley called the Q class “bloody whitebait” , in reference to their slender beam of which he disapproved.”

“Dave Patten and John Shelley sometimes raced their Cherubs with us also.”

“Some generous guys such as Captain Jenkins, chair of the Harbour Board, donated trophies.  The Ladies Rose-bowl trophy  was awarded to the winning boat with a lady aboard – and one year this was my wife.   I borrowed John Shelley’s Cherub and won, easily beating the Qs.

“We had prize givings at the Richmond Yacht Club and the Westhaven Cabaret, and, before the Auckland Harbour Bridge was opened in 1959, we used to charter a Blue Boat to get us  there and back. I won’t forget Gary Tait misjudging the distance between the wharf and the gunwale and stepping into the tide. A sobering experience!”

“ I was the Club Captain for a year or two but by 1961, the Birkenhead Boating Club had folded. I remember this date clearly  as it was the year I got married.  David Cooper was the last secretary – he asked me  what to do with the trophies – I told him to give them to the NBYC.”

Many of the trophies are sitting in the trophy cabinet 50 plus years later at the new Northcote and Birkenhead Yacht Club clubhouse.

“Once the BBC folded,  I got interested in sailing large multihulls which meant that I didn’t take too much notice about what was happening to small boat sailing round the Northcote or Birkenhead area.”

“ I do remember some discussion among locals about opposition to putting a clubhouse on top of the dinghy lockers at the top of Birkenhead  Beach near the wharf. Others wanted a shed on the Shingle Wharf next to the beach and I remember a small 8’ by 8’ shed there, later replaced by a Skyline garage closer to the main Birkenhead Wharf.”

“ In the 1970s, I joined the crew of ‘ Krisis’ a Lock Crowther trimaran, possibly the fastest sailboat in Auckland at that time. Malcolm Davies built it  and was the first owner, then later Duncan and Andy Stuart took over as skippers.”

“ She flipped over once.  Sailing close in to the wharf area in the central city  she was hit by a gust. At the enquiry, an architect presented evidence that it was possibly a downdraft from the Air NZ Building, that flipped it.”

“   Between 1974 to 1982 I was Multihull Chairman of the New Zealand Yachting Federation, then Chairman of the National Challenge Committee. During this time I worked hard to persuade the more conservative members of the worth of multihulls  and of the need to accept that they were here to stay.”

I sailed with Dave Barker on his catamarans ‘Sundancer’ and ‘Sundreamer’.

Since then I have built and sailed a number of radio controlled yachts.”