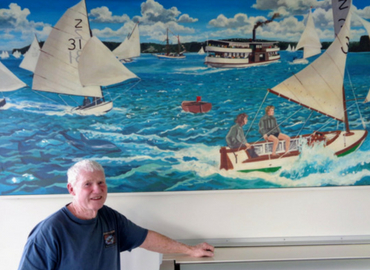 From P Class to the America’s Cup!

Who is Murph McDonnell?

Murph has been involved in yachting at the highest levels: he has been shore crew for three Round the World races and for nine America’s Cups. He knew Dennis Connor well. And his love of yachting  began when he sailed a P class from the Gold Hole, on the other side of the Harbour Bridge.

Murph lives in the U.S. but was over here visiting his critically ill brother in late February, 2018. Keith Salmon saw a comment of his on the NBYC Facebook page and arranged  to meet him at the Clubrooms with me (Ted Berry) on a Thursday afternoon.

Murph – his kiwi accent modified by a slight American twang after nearly 50 years of living in the States – entertained us for  two hours with his stories. He was funny and enthusiastic and very entertaining.

His first words were: “ My life has revolved round yachting. I can’t get enough of it!”

Early Life on the Shore

Murray grew up in Sylvan Avenue at the bottom of Onewa Road, attended Northcote Primary, and Intermediate and then Northcote College in 1963. His father was a teacher and brass band fanatic, a talent that was passed on to Murph’s brother Ricky, who won  many NZ titles as a bandsman specialising in the euphonium.

“ I was always a bit of a stirrer. In the third form one mufti day we were told not to wear jeans or we would be caned. I told my mates that if we all wore jeans, they wouldn’t dare cane us all. Over 100 of us turned up in jeans. They lined us up in three rows and caned the lot.!!”

Murph was on the ferry with his Dad, some time in 1960  when he saw a guy in a P class. He told his father that this is what he would love  to try.

Even better, Dad bought him an old, heavy P which they transported on top of the family Morris 10. Years later, Dad built, with a group of fathers, a P for Murph’s brother, Ricky. Ricky’s was a much lighter craft and Murph remembers being mightily peeved.

A cotton sail with a heavy wooden mast that Murph built under his father’s supervision, no lessons, just time on the water; gybe, capsize, do it again, until the boat was an extension of his body.

His mast was a hefty dog, and he, longing for a lighter spar,  borrowed one, being told that    “it’s not the mast, it’s the way you sail the boat.” He won three races that day and was never allowed to borrow the lightweight stick again!

“ I loved racing, dreamt of it during the week, dreamt of the trips to Takapuna, the Bays, Westhaven.”

Murph also played rugby league for the Northcote Tigers and would often sail over to Westhaven, with playing gear on board, play his game then sail back to the Gold Hole on the Shoal Bay side of the Bridge.

Murph claims to be an ‘ok’ but not brilliant sailor but he was good enough to get third in the Tauranga Cup, the start of many successes on the water. He sailed in the Tanner Cup for the Pupuke Club and won a half model for winning the club champs.

The Northcote Clubhouse in those days was a small shed on the beach, near the location of the current boatyard on the east side of Northcote Point. The Mums served up mince on toast after racing. Boats were launched from Sulphur Beach, the Gold Hole, the current was strong and at low tide, Murph and the fleet would have to drag their boats round the mark through the mud.

He overheard one of the mothers who had been out on the patrol boat: “ It seems that these boats won’t go unless you swear at them!”

No fancy gear in those days… a bulky life jacket with a pillow behind the neck and, in cold weather, a sweater worn upside down, your legs in the sleeves.

Kohimarama was the P class capital in those days, with over 100 P class sailing at times.

Working Life and a Change of Class.

In 1966 Murph left school and began a four year  apprenticeship at Sails and Covers with Chris Bouzaid, famous for his One Ton Cup exploits in Rainbow 2.

His modest earnings as an apprentice eventually allowed him to buy Peter Blake’s old Zeddie, Tango. Murph claims not to remember his crew.

“I’ve forgotten his name. All I remember is that the sod stole my girlfriend!”

In Tango they came second in the Cornwall Cup in Paremata, just north of Wellington.

Murph sailed in the Sanders Cup, the X class contest, in Wellington.

He also sailed the old NZ Moth and in 1968 won the NZ Junior Champs, then represented New Zealand in Australia.

From the Moth to the 18 footers with Chris Bouzaid. In 1970 they were second in the Worlds in San Francisco in a Bruce Farr designed and built speedster with a three man crew, not the usual four. After this all 18 footers carried three man crews.

A New Life in the States

In 1971, Murph met and married a local woman in the U.S.A. and moved to live there permanently, setting up as a boat builder in Maine.

While building a keel for the 12 metre America’s Cup boat, Liberty in 1983, Murph met Dennis Connor – a famous skipper in this contest – nemesis of the first New Zealand challenge in 1985/86 in Fremantle.

Dennis was a wonderful contact for Murph. Since then he has  been involved in three Round the World races as a shore crew. This has involved boatbuilding, operating forklifts, loading containers and a whole range of whatever-needs-to-be-done to meet the needs of the boat crew and the demands of the boat.

He has also, through his contact with Dennis Connor, worked for nine shore crews in the America’s Cup.

Murph plans to settle back in New Zealand in 2020 when his tenure in boatbuilding ends. He looks forward to renewing contact with the Northcote and Birkenhead Yacht Club, to play golf and go surfing. His passion for sailing is as strong now as when he first tested the breeze off Northcote Point.

Murph – we look forward to having you back, to hear more of your stories and to share your love of life on the water!